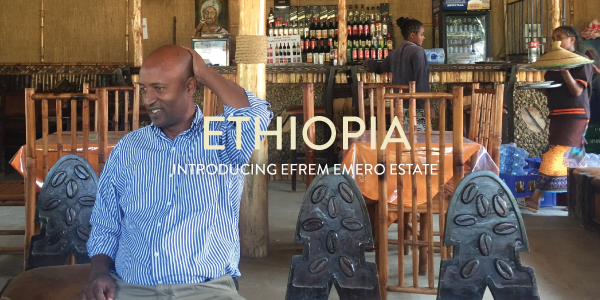 Efrem was first introduced to us in 2017 as a new but trusted producer by Crop to Cup Ethiopia organizer, Moata. His year-one quality was through the roof. No complaints there.  We met him during a stop in Bonga town, where we shared an Ambo and some tibs (pictured).  It was enough time to hear a story that included military, Cuba and Israel, and not near enough time to wrap our heads around a saga of that magnitude.   Which is to say, we were very interested to learn more.

Fast forward to November as we are visiting near the onset of the 2018 harvest. The November rains stayed late this harvest, so we got stuck in mud. Lots of mud. Day one started with a slow and sloppy hike into the farm which gave us time to hear more of Efrem’s story.  He is an Ethiopian-born, Cuban-educated and part-time Israel-residing accountant who returned to work in his home community through coffee some six years ago.

You may remember that the US took part in a series of airlifts that brought almost all of Ethiopia’s Jewish population (~120,000 souls) to Israel following the ‘violent red terror’. But the Beta Israel (as they are called) have a history in Ethiopia that they trace back to the tribe of Dan (son of Moses), and now a few brave members, like Efrem, are coming home to reestablish their community.

“They claim Decha is the birthplace of coffee, and that coffee is the source of happiness for our people. Emero means happiness…” Efrem explains as he serves us delicious coffee, taro root, and a bread made from fermented roots of false banana trees. “This is what we eat here on the farm” he continues, as our small group politely nibbles on the spread.

Noticing my sweat, and not knowing it was from the false banana bread, he changes topics. “The hike here, it was hard wasn’t it? I’m hoping to build a road by next year”.  Actually, he needs a few roads, one being a foot-bridge over a local river (where we saw cattle being dragged by the horn through fast moving waters deeper than their heads.)

Later we found out that Efrem took us the long way into the farm. Not a bad way to show off his estate, which included not only coffee but cardamom, teff, old growth trees and easily startled spider monkeys.  Or perhaps he took us the long way so that we’d work up a soggy-footed, high-elevation sweat.

In the parts where hiking was not possible, we saddled up.  When horses could not make it, we jumped on a tractor borrowed from a neighboring farm. This is the western highlands and the highlands are wet almost year-round…which is why our first conversation with Efrem was on the subject of drying.

While the harvest had just begun, Efrem’s drying trays were already thick with the first collection. When preparing naturals it is common to gradually increase the depth of they cherry pile (as a decrease in overall moisture occurs), this is done to consolidate and avail drying space for incoming cherry. But especially during the first few critical days cherries MUST be one layer thick and no more.

It was clear that Efrem would need more drying beds in order to scale up with the harvest. The day following our visit we saw a facebook update – viola!, more drying capacity. We are not surprised; this is Efrem’s style. He’ll take advice into immediate action. Last year Efrem’s farm was brand new.  In a years time, he constructed a brick-making operation, invested in a ton of raised bed drying, and erected two facilities, an office + warehouse.  Next on his to-do list is a vacuum packing machine.

This year, in addition to growing his volumes from 1 to 2 containers (ambitious), Efrem set goals around investing in local schools and improving the roads.

We bought all of Efrem’s coffees this year.  Most of it has been contracted out before arrival.  But there’s still a few bags that we reserved for our spots.  Efrem’s coffees lean into a subtle blue fruit-leather / concord grape profile.  They’re very clean and we think play especially well in espresso, which extenuates a nice round body, and coaxes those deep fruit notes to the fore.

Previous From export to farm-gate in Ethiopia - the Keta Maduga pricing example
Next Introducing...Aequitas!