What’s in a name

São Gotardo means ‘village of confusion’. This is the Cerrado Mineiro region of Minas Gerais; an area best described as a high-altitude savannah, and best known as the carrot capital of Brazil. In addition to producing nearly half of the country’s carrots, this region also grows onions, garlic, onion, potatoes….and coffee.

Coffee was the most recent to join the party, starting in the 1970’s around the same time that São Gotardo earned it’s name. This region was designated as a destination for a rural resettlement program that the government was promoting in an attempt to feed growing urban centers. São Gotardo was the town to which people were relocated, and coffee became the way out of confusion.

Up to this time the land was owned by one rich individual who, it was said, was above the law. Enter Cooperativo Cotia, a cooperative owned by and representing Brazilians of Japanese descent. As part of a government resettlement program, Cooperattivo Cotia opened an office in São Gotardo to recruit farmers and then support them in the region.

This support led to pressure on the land cartel, which ended in the breakup of land into 100 lots, all reassigned to new farmers as part of the government resettlement program. To this day lots are still referred to by their number, with many still operated by Japanese Brazilian members of Cooperativo Cotia.

Coffee in the area was the exception until 1975 when a bad frost– called the black frost –wiped out many plantations further south (further from the equator, mind you). After this, more farmers moved up to the highlands of this region which, previously, had not been explored much at all, let alone turned to crops.

Compared to land around it, the terrain here is of a higher altitude, cooler and pretty flat. Perfect for fruit orchards, tubers plots and coffee gardens. And so, for the past 40 years, coffee from this region has been cultivated and sold as a commodity along the same channels and by the same brokers by which their potatoes get to market.

But now a new generation of farmers is looking back, bonding together in celebration of their Japanese roots. And looking forward, to the challenge and opportunity of bringing specialty coffee to their region. This group is patriotic, proud of their state and wanting nothing more than to see their name on coffee menus worldwide. Well, not their name, but names from their region – ‘Minas Gerais’, ‘Cerrado Minerio’, ‘Alto Paranaiba’, or ‘São Gotardo’ for example..

Behind this movement is a young entrepreneur named Yuki Minami (age 36). She is starting off representing her family and two other young farmers (Michael Tomizawa, age 35 and Edson Tamekuni, age 37) under the name Aequinas Coffee. The name means was chosen to represent Yuki’s belief that when farmers know what their coffee is worth, it is possible to do coffee differently than the way her dad did it. 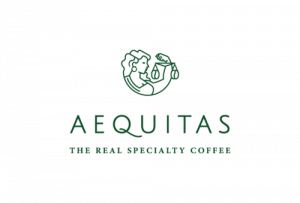 “Aequitas is Latin for equity. But she was also a goddess that meant justice, transparency and fairness. And this is what I wanted to do, I wanted to promote a fair trade for producers.”

While raised on a coffee farm, Yuki never thought she would work in coffee. She started with an interest in languages, and later in business administration, before realizing that this work took her too far away from the hands-on agriculture that she loved. Her studies exposed her to people from around the world, and ideas too. For example, the idea that coffee can have different flavors – and that people will pay more for better tasting coffee.

Her ‘come to coffee’ moment happened in 2013 in a Parisian café. Here she saw coffee from São Paolo and realized two things at the exact same time. The first was how far coffee travelled, the many hands and miles travelled from her home to her. And the second was how her home needed a better agent; this coffee was from Minas Gerais but marked simply as a product of Brazil.

“One day I would like to have coffee from my community on a menu like this. This was in 2013 – I came home with a question in my mind – do we have this coffee in my home, is it possible to produce coffee that is good enough to get it on menus worldwide”.

In 2015 Yuki brought a sample of her coffee to a micro-roaster in São Paolo and asked him for feedback. “I did not know that we were already producing specialty coffee”, Yuki said, “or that an 86 was a good score. I also didn’t know anything about specialty, and so didn’t get a fair price when I sold to this guy. From this experience I realized that farmers must know what they have”.

Yuki had moved back home with her father, and could not get over one fact. He has been doing the same thing – farming coffee – for over 40 years. But his situation has not changed, has not improved. Yuki identified the need for good management – she described it like seeing incredible talent without an agent. If her father, and her neighbors, could get better representation, Yuki thought, they could get better customers. With better customers they could get a bigger share of their harvest, getting up enough to see the path forward.

Four, five years ago there was no talk of specialty coffee. The idea that coffee could have different flavors, and different values, was foreign to the region. But this is part of what Yuki brought back. With a plan in place she started recruiting her neighbors behind the simple idea – we do the work we get the reward. She argued that they could get better prices on the commodity market by working together to pool costs and negotiate sales as a block. She argued that some of their coffee could be kept aside, improved, and sold as specialty. And she convinced them that she could find buyers interested if they were willing to invest in quality. Lastly, she had to convince them that she was the right person, that she would get the training (Q), and make the connections (IWCA, SCA) necessary to make this dream come true.

This 2018 import was Yuki’s first. We are honored to have met such a spirited and capable partner in coffee. Please join us as we welcome Yuki and her community to specialty coffee.

The main challenge is renewing the coffee trees. They will start an experimental plant to try out classic bourbon and the new hybrid capped ‘parasio’ or ‘SL-34’; historically they have only planted red and yellow catuai.

37 years old, Edson’s grandparents came from Japan, just like Yuki’s, and his wife is an incredible baker. They produce naturals and pulp naturals across two farms.

Focus of this farm is on productivity.

Farm 2: Vargem Grande (pronounced Var – Gem). Was purchased two years ago from a man who grew too old to manage the farm. But he was an award-winning coffee farmer (#13 Cup of Excellence in 2016 on the first year they took over operation of the farm). They just needed younger labor and management. The focus is on quality; shade-grown low yields.

Maycon (Michael) is 35 years old. His wife Patricia roasts; you can find their coffee at the local Farmers Markets.