Southern Tanzania’s 2019 harvest hit US shores at the same time as the Covid-19 quarantine. Now, six months later, benefitting from early rains the 2020 Southern Tanzania harvest is coming to a close. Over 90% of the volumes are in, with the first auction scheduled for November.

We got a first look at the top CPU processed lots from our longest relationships in Tanzania and we liked what we saw. Or, rather, tasted.

Since last year, the national coffee auction has been divided into several regional auctions with the intention of bringing this process closer to the farmer. Mbeya’s auction in November is the first in 2020; from there it will move to Mbinga then to the north.

The vast majority of Tanzanian coffee is sold through auction, where cooperatives (called AMCOS) sell parchment to exporters who then blend and resell. Much of Tanzanian coffee goes to Japan, who buys more than the next three buying countries combined (Italy, Germany, and the US).

The alternative is the direct export channel which was temporarily banned in 2018 and brought back due to the desirability of this option over the auction; to both buyers and suppliers.

When an AMCOS sells through the direct export channel they own the coffee up until it is sold, green, FOB export. Knowing this price (as opposed to parchment FOB Mbeya for example) gives groups a much-needed advantage when it comes to negotiating prices for their other coffees.

Direct export contracts will only be approved by the Tanzania Coffee Board if their prices are higher than the highest price posted across the last three auctions. Further, these contracts must establish the same high benchmark across all grades (AA, AB, PB, and C) – allowing farmers to get a better price for all of their coffees.

The reason you don’t see more direct exports from Tanzania is that it’s expensive. It requires a commitment from an exporter which, in turn, requires a strong commitment from an importer or roaster. Moreover, once an exporter establishes a direct export relationship with an AMCOS they must commit to being there, year over year, through the highs and lows. Why? Because once an AMCOS sees what their coffee is worth, the only way to get that price is through direct export.

Milling will take place in September, shipments in October, and arrivals are expected to clear around Thanksgiving.

In the South, two AMCOS groups stand out: Mwlayego and Iyenga. They are our oldest relationships in Tanzania and quite objectively produce some of the country’s best coffees. Both are located in Mbeya and collect coffee from members spread out over a 4-5 village area.  They have won recognition—and independence—for their commitment to specialty. 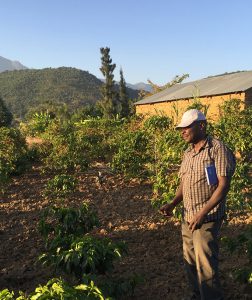 Mwalyego AMCOS is headed by Edson. He’s the Chairman, a strong leader, and tough negotiator. They’ve participated in direct export (to us) since 2013, and over the years have gotten to know their coffee better than almost any other AMCOS in Tanzania.

An extension worker who was there to help with certification (Utz), saw some early crop coffee coming through the mill and bet Edson that it wouldn’t rank as specialty. He put 5000 shillings down that it would, and it did – scoring over 85. Edson uses his knowledge of coffee (and relationship with Crop to Cup) to negotiate some of the highest benchmark prices across Mbeya. Their secretary, Exhaud, is the engine of the AMCOS. He manages the day to day operations, maintains a crop care calendar for members, and is especially johnny-on-the-spot when it’s time to apply fertilizers.

With Edson at the helm and Exhaud manning the sails, Mwalyego has seen nearly a decade of continual improvement. They have a clear vision for the future and the future is specialty! In 2018, Mwalyego took home 6th place in the overall Taste of Harvest competition, and they’ve set their sights on first.

Iyenga AMCOS won first place in the 2019 Taste of Harvest competition, meaning that they had the #1 coffee in all of Tanzania last year. They also took 5th and 6th place, showing quality across all grades (AA, AB, PB). 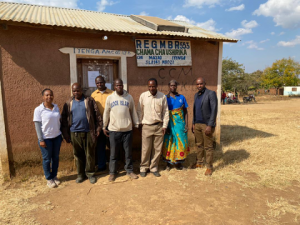 Iyenga has a reputation for being credible. The group is, by far, the most organized AMCOS in the South. Their track record allows the AMCOS to borrow from any bank, giving them great leverage and near-total independence from exporters (who also provide financing). Their secretary, Mbazuha, passionate, calm, and perhaps the second happiest person in the cooperative (pictured below in a sweater the middle).

Right now, at least, the happiest person is the machine operator (pictured below) who is standing next to their brand now Penagos 1.5 pulper. 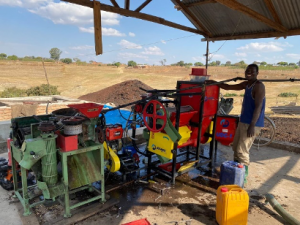 This machine pulps 1.5 metric tonnes of cherry per hour, multiplying by four times their capacity to process cherry through central processing. This is a big deal, as delivering cherry to the CPU allows members to be paid out earlier, for cherries to be properly floated and centrally dried. It’s also a big deal because, last year, this machine operator was pulping by hand!

Iyenga’s success has caused membership to grow very quickly. They’ve added 20 – 30 new farmers this year alone. More than this, members are delivering more in cherry as opposed to home processing and delivering in parchment. They see the premiums, convenience, and recognition that comes from the CPU.

Two seasons ago, the success of their CPU led to too many cherries and not enough drying capacity. One season ago, they built drying beds in partnership with Crop to Cup customers. This season, they got this new pulper to catch-up with drying capacity. 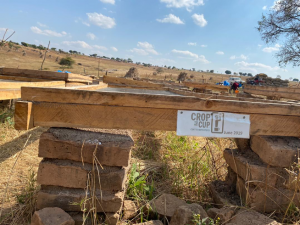