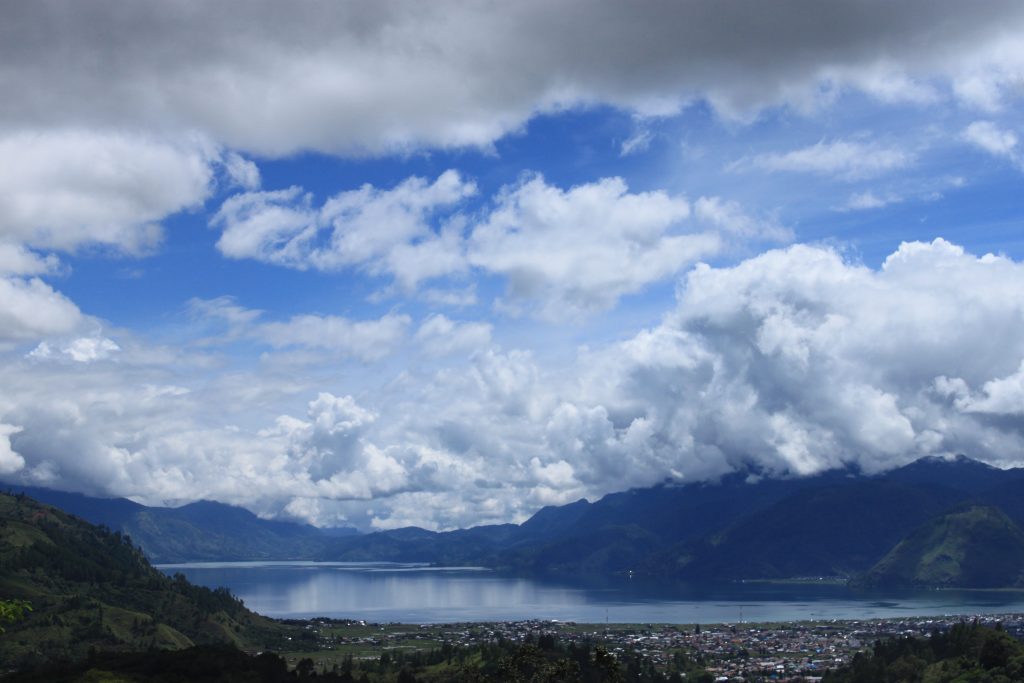 Jake’s attempt at a sourcing narrative

* Jember: a research facility in Surabaya Indonesia, and the common name for S795. Related to a Typica variety which may have originated in Ethiopia before coming to Yemen via Ethiopia.

* Sigararutang: bahasa for ‘immediate debt’ because the tree begins to harvest after only two years.

Overview:  To talk about Sumatra we need to speak of it’s size. It’s large. Larger than Texas and Florida combined. In the middle of the island is a caldera called lake toba. The largest caldera from the largest volcanic explosion this world has ever seen. In this lake there is an island bigger than the country of Singapore. It is because of this lake that Sumatra has the largest rainfall seen by any coffee exporting country – the lake feeds clouds trapped in by the island’s 1500m tall mountains.

Sumatra is old. While not native to the island, Sanskrit as a language has been preserved here from ancient times. When the Dutch East Indian Trading Company came, Aceh (and later Java) became  the first commercial coffee origins that the world had seen.

Sumatra is big; I know I already said that, but it is really big. There are over 52 languages over four major ethnic groups (Acehnese, Minangkabaunese, Batak and Mala) covering an area over 170,500 square miles around. However big the island, however, there is only one government authorized port of export – the 15 million person city of Medan. To get here coffee has to travels as far as 375 miles, over massive mountains and on roads that are mostly still mud.

Bold comparison: Gayoland is the country western of coffee origins. It has big beans, a rugged twang, and happens to be full of cowboys.

As evidence I’ll take this gentleman as a place to start our story. 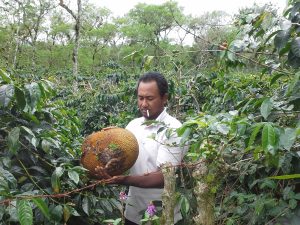 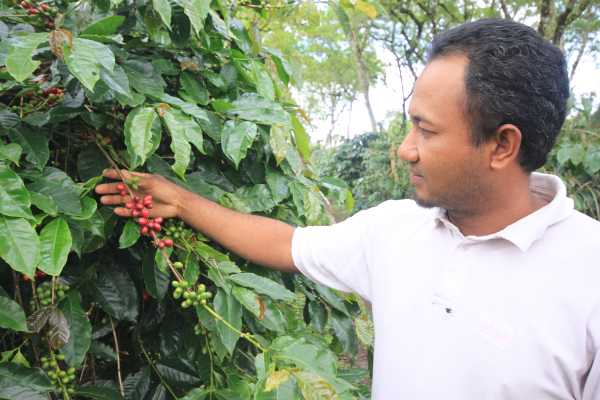 While I failed to capture his true name in my notes, but during the day we spent together he only really smiled when I called him the Gayonese Cowboy. He hails from the highlands of Gayo, where they have a locally famous horse race once per year, and where they grow some of Sumatra’s most respected specialty coffees.

In addition to the annual horse race, one of the communities I visited  took one time a year to collectively stump trees, set insect traps, run barb wire or dig irrigation.

Farmers know how to use traps made of ethanol and methanol in a plastic water bottle, but it takes an entire community doing this to get rid of coffee borers in any one region. This community cooperation seemed incredibly valuable…the most common defect in Sumatran coffee (that I saw) is insect damage. Well, past physical defects caused by old wooden home–made pulpers. 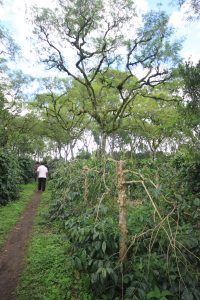 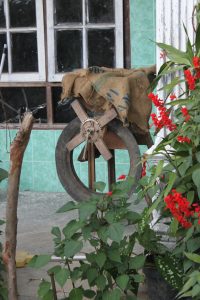 As I said, though, this community was different from other communities in the area, as far as I could see. They were also different than they were two years ago, from what I have been told.

You see, most farmers in Sumatra do not drink their own coffees; the local brew of choice is a low grade mixture of robusta, corn, and some spice I could not identify. When I visited four different communities in the Aceh area I was pleasantly surprised in the Gayonese Cowboy’s community when I was served the most delicious natural-processed coffee I have tasted to-date. Not only were some farmers drinking their own coffees here, but they were also experimenting with their crops. Later in the day, I would go on to roast and properly cup with these farmers as well. I was impressed.

These farmers are part of the newly formed One Coffee Cooperative. 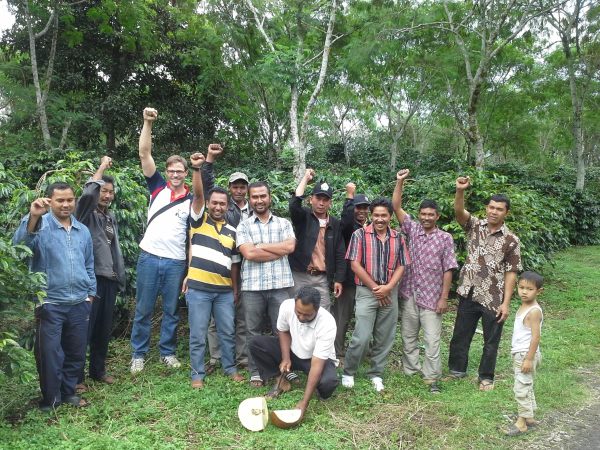 Perhaps the reason they are so different than their neighbors is that none of the cooperatives’ members were originally from the area.  Back in 2009, an epic tsunami hit Aceh. Afterward, many people had no reason to return to the coast and, instead, took the government upon a relocation program that provided farmland up-country. And so these farmers, members of the One Coffee Cooperative, relocated to Gayo to grow coffee. For three years they received intensive support from the International Migration Organization (IMO), training on how to grow, process, and cup specialty coffee. The IMO organized 1, 100 farmers in groups of 20, each group has 5 delegates called key farmers who represent their community in decisions regarding certifications for example. However at the time of my visit this cooperative was still getting going on the selling side of things; being new to the area they did not have a local buyer, and so were compelled to sell into the middle-men coffee markets at reduced prices. These farmers are over 20 hours away from export markets in the city of Medan. 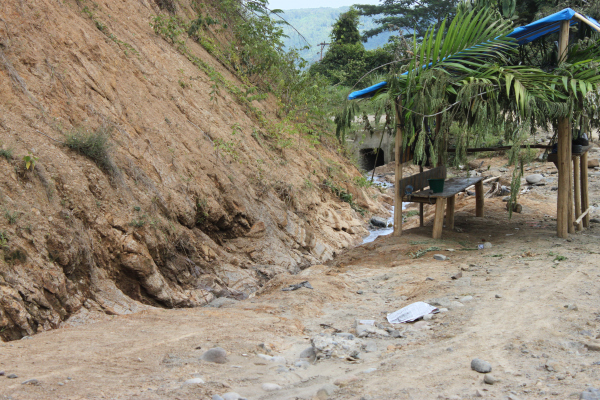 Yes, 20 hours. And this may be the reason that Sumatran coffee is hulled while wet, and dried while in the green. The  wet hulling (Giling Basah) process takes coffee parchment is dried to 30-50% moisture before being milled into green beans. Higher moisture during transport from the farm to the port can lend to the classic ‘earthy, musty’ flavors that you get in some Sumatrans. 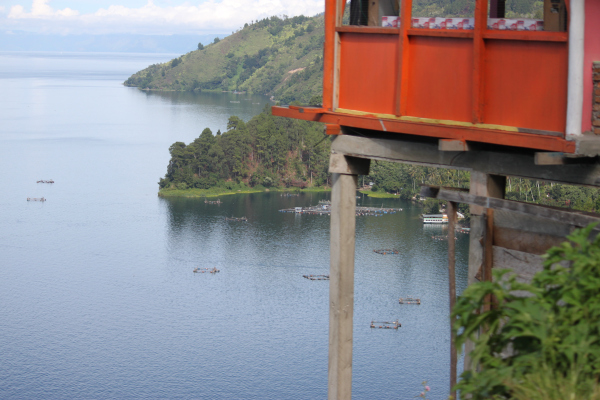 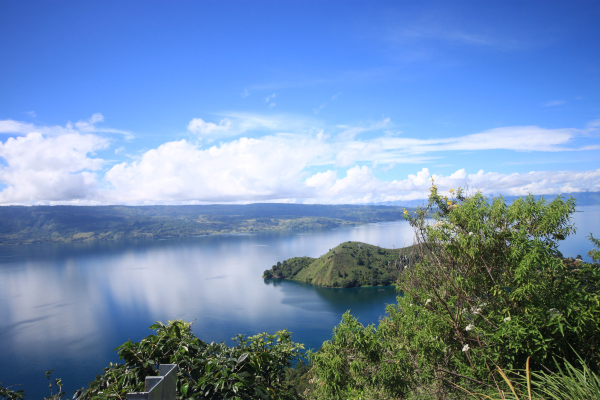 Closer to Medan, but still 12 hours away by car, is the coffee growing region of Lintong. Here there are another 1,100 farmers registered to sell directly to exporters in Medan. This is unique because a vast majority of farmers in Sumatra sell through a network of middle-men called ‘Tokehs’. Tokehs are big men in their community; young farmers aspire to do well enough to quit their farm and act as the village Tokeh. Tokehs are quite protective of their communities; on one hand, they are the ones who provide loans when needed, and on the other, they hope to keep their stable of farmers from selling to anyone other than them. Going through Tokehs, then, makes traceability impossible; they are unwilling to share information about ‘their’ farmers.

However, while in Lintong Volkopi – the exporter who toured around with me – showed me a project they were just beginning. This project was to register farmers directly, instead of through Tokehs. These farms, I was told, are oftentimes women-owned or smaller farms who had poor relationships with their local Tokeh.

So while volume is low from these farmers, they can now skip the local market and instead negotiate directly with the exporter. 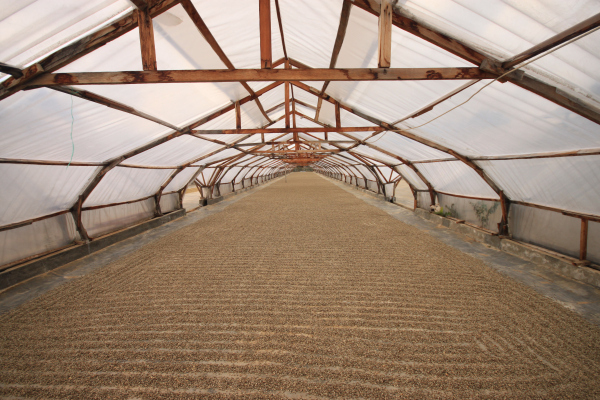 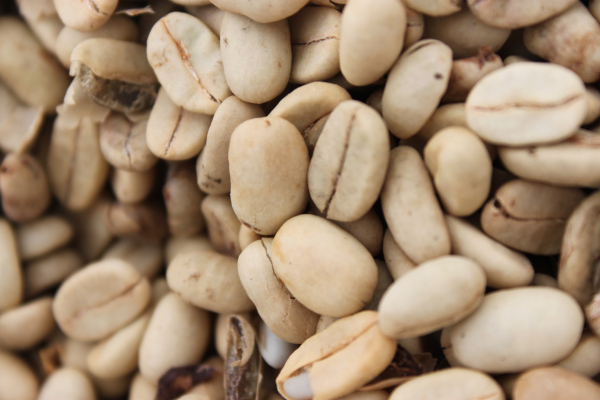 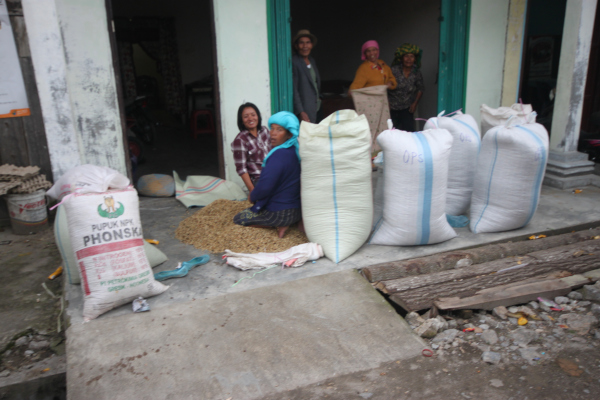 Oh, and yes, the process of registration was Rain Forest Alliance compliant, so these farmers are certified. Because of this traceability we can know that coffees indeed come from within the true Lintong triangle, as opposed to being sold into Lintong from the surrounding area. Below is a picture of the open coffee market in Lintong where coffee can come in from where-ever and come out at a Lintong premium; in the cup this means that we will consistently find classic Lintong flavors, characterized by a bright citric acidity.

My next stop was just around the bend from Lintong, a small town called Simalungun. Coffee from this area, if not sold as a Lintong, is called a Mandehling. Mandehling coffees come from a large catch-basin, and are characterized by a red berry sweetness. Here we found a coffee that had more of a red bell pepper snap!  In Simalungun there is  another project that was quite worthy of note; the local church decided to become a Tokeh.

While maybe 3 percent of Indonesia is Muslim, in this specific area as much as 95 percent of the people are Christian. This goes back to one Dutch missionary (localled called Tuk-Tuk) who lived in the area. Here, the Protestant church is strong; there is a church within 15 minutes walking from nearly every village. Over ten years ago pastors from this church started a credit union and elected commissaries to represent their communities and care for those in need. Last year these same commissaries took on the role of coffee buyer, representing a more transparent and beneficent Tokeh. 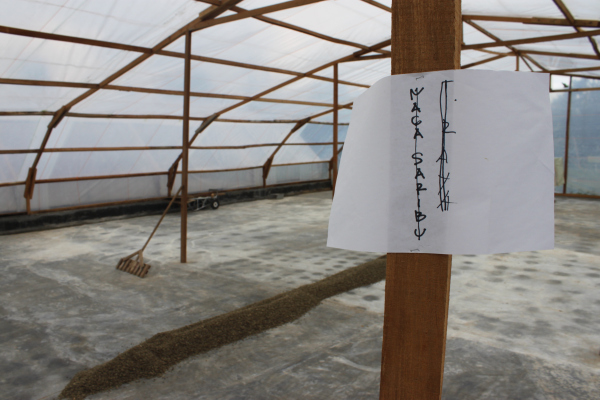 They built a drying center and dry mill which, along with the church’s credit unions, provide a better price structure for farmers – including the first profit-sharing plan in the region; 1/2 of the markup traditionally taken by a Tokeh is shared back with farmers as a second payment for their coffee. For example, when I was there I found that there was usually a 20 cent markup between the farm and Medan; 10 cents of this markup went to fund church operations, and 10 cents went back to farmers as a premium.

CONCLUSION: I NEED TO COME BACK

This was a learning trip, and learn I did. I was lucky to find some great exporting partners, and as well, to have my wife along with me to ask all those questions that need to be asked. If you would like to learn more please feel free to contact me directly; jake@croptocup.com.  Expect more posts in the future!